Distinction for CSI:Brainwave research project of the Medical Physics Lab of AUTH

The Hellenic Spine Society (http://eess.gr) awarded the presentation of CSI:Brainwave project with the 2016 “Vicky Zachariou” award during the 10th Hellenic Spine Congress & Joint Meeting with French and Turkish Spine Society, that took place on 26-29 October at the Makedonia Palace Hotel in Thessaloniki (http://synthesispco.com/spine2016). 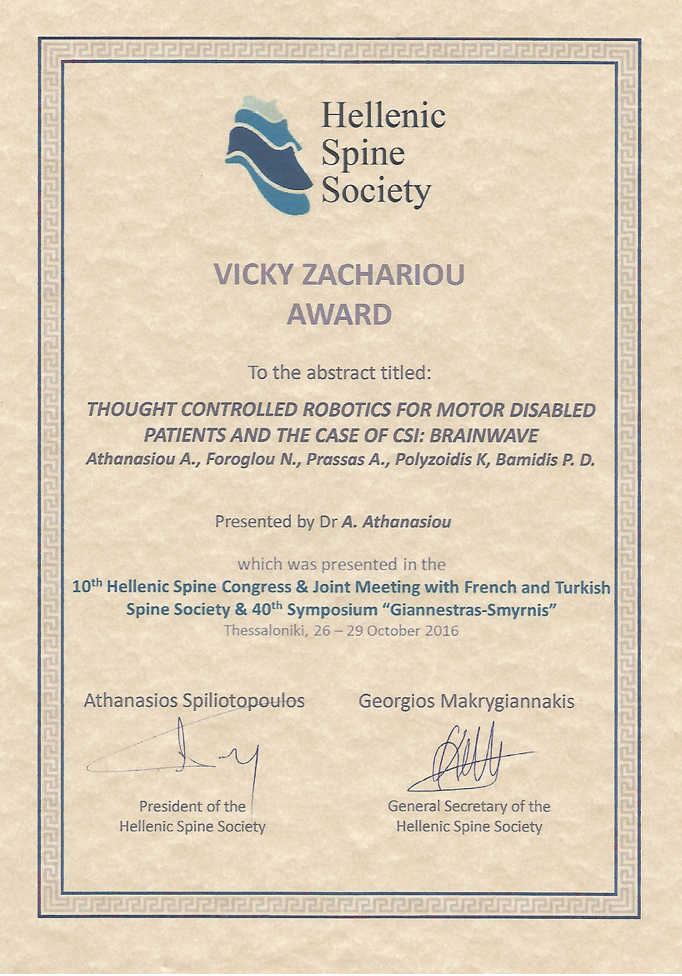 The award was given for the abstract titled “Thought controlled robotics for motor disabled patients and the case of CSI:Brainwave” by Athanasiou A, Foroglou N, Prassas A, Polyzoidis K and Bamidis PD, presented during the first day of the congress by Dr. Athanasiou. The announcement was made during the official gala dinner of the congress and the President of the Hellenic Spine Society Dr. Athanasios Spiliotopoulos handed the award.

The presentation aimed to introduce a physician and surgeon based audience to the concepts of Brain-Computer Interfaces and neurorehabilitation for Spinal Cord Injured Patients and also to the relevant CSI:Brainwave project of the Medical Physics Lab.

CSI:Brainwave is a multidisciplinary project that involves development of rehabilitation BCI-controlled robotics (arms), the validation of BCI-based neurorehabilitation feasibility for Spinal Cord Injured patients and the study of brain connectivity in acute and chronic SCI (http://medphys.med.auth.gr/content/csi-brainwave). Assoc. Professor Dr. Panagiotis D. Bamidis supervises and coordinates this promising project, having the Laboratory of Medical Physics and two neurosurgical departments to collaborate in order to produce added scientific and everyday life value for disabled victims of SCI. The project has already achieved to attract a research grant by Cervical Spine Research Society – European Section and has applied to more funding bodies as well in order to achieve its goals.

“Vicky Zachariou” award was instituted by The Hellenic Spine Society and is offered by the Professor of “KAT” Trauma Hospital of Athens K. Zachariou in memory of his late daughter.